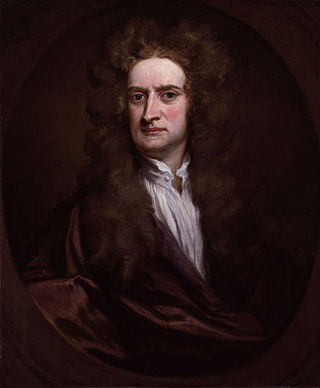 Newton in 1702 by Godfrey Kneller

I feel that this thread of posts has run its course for now, though I may decide to return to the subject in future posts. Frankly, I'd not intended to take the story this far, and in as great a detail as I've done here despite the fact that there's quite a bit more to write about Kelpius and the other distinguished members of his group, as well as the contemporary Kelpius Society as well.

That said, I would add one more thing here. I met about two years ago with Jim Green, head archivist at the Library Company in Philadelphia (an organization founded by Ben Franklin and associates, by the way). At that meeting, which was devoted to a discussion of Kelpius, Jim took a very old volume down from  a bookshelf in his office. That book turned out to be a copy of Isaac Newton's Principia Mathematica. Jim explained that the Library Company had recently obtained a batch of books, and this volume was among them. And it appears that this particular book may have been the very first copy of the Principia to have been brought to North America.

But how did the book come to Philadelphia? Jim explained that Anthony Grafton, preeminent Renaissance historian and historian of ideas, had become interested in the book. Grafton's faculty profile on the Princeton University website notes that his, "special interests lie in the cultural history of Renaissance Europe, the history of books and readers, the history of scholarship and education in the West from Antiquity to the 19th century, and the history of science from Antiquity to the Renaissance." According to Jim Green, Grafton has been investigating marginalia – the notes written in the margins of books by their owners – and along with that, has been doing close and careful analyses of that handwriting. Having examined quite a bit of material from the 17th century, he's often able to identify who might have owned a given book, and who might have written the margin notes. To the point -- Grafton believes that the marginalia in the Library Company's copy of the Principia were written by none other than Johann Jakob Zimmerman! This was Zimmerman’s copy of the Principia!

Recall that Zimmerman was the erstwhile leader of the Kelpius group, but had died at London just prior to the scheduled departure for America. Tracing the provenance of the book, Grafton surmises that it was likely brought here along with a small collection of other books by Zimmerman's widow, who stayed on and sailed with Kelpius following the death of her husband. The Library Company has acquired those books.

Recall too that Zimmerman was a highly educated man, as was everyone in his group, but Zimmerman had a special expertise in comets, and in astronomy more generally. In his work, he combined careful observation within a framework of science, but translated his observations into religious or astrological terms. This wasn't unusual during Zimmerman's lifetime, which was a transitional moment in the development of modern science. In fact, looked at from the other side, Newton himself maintained an interest in alchemy, and is the author, alongside the Principia, of a number of alchemical writings and notes -- some of which, by the way, are held in the collections of the Chemical Heritage Society at Philadelphia.

I've reconstructed my conversation with Jim Green from memory, and believe I've rendered it accurately. I should add that at this point I don’t know whether Anthony Grafton has been able to definitively verify that Zimmerman was the owner of the book discussed here.