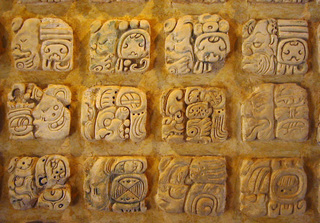 I tend to begin writing by writing about the process of writing; let's see how well I can avoid that here. But even so I don't intend to write here about writing in the way that I usually engage with that topic, but I am nevertheless thinking about how to go about contriving a blog post that would link the most "recent" post (August 2019!) with a new one. I doubt that's possible, or desirable. I do want to make a tentative effort to assay, though, the practice of writing poetry. So here are some random (or not entirely random) thoughts, along with some effort to tie (or not tie) it all together.

I've been pondering Charles Olson's insight that the typewriter enables the writer to set print, more or less, for their own writing. The typewriter is a mechanical device that moves the printing process along, providing the poet with the tools to see in advance how the poem will appear on the printed page. And it may also help the poet to manage the technics of poiesis.

(As an aside, I wonder whether Olson's insight, which has influenced any number of poets, may also have encouraged the contemporary small press movement, and the independent printer/publisher of chapbooks -- recognizing that broadsides, chapbooks, etc. have been printed and distributed for hundreds of years. But I tend to think of the small independent press, as we know it, arising sometime during the 1950s or 1960s -- which was, not coincidentally, a time of social, cultural, and political transformation.)

Olson's argument was deployed by Dennis Tedlock in the preface to what may have been Tedlock's last book: The Olson Codex: Projective Verse and the Problem of Mayan Glyphs (Santa Fe: University of New Mexico Press, 2017; Tedlock died in June, 2016). The book opens an interesting window into Olson's work on Mayan glyphs, which Olson undertook during a visit to Lerma, Mexico in 1951. Tedlock writes:

The typewriter, says Olson, "leads directly on toward projective verse". He finds the use of the machine ironic, since the primary instruments for the production of the syllables and lines of projective verse are the ear and the voice of the poet. But as he sees it, the typewriter gives poets the stave and bar of the musician. They no longer have to wait for the typewriter and printer to see what the poem will look like on the page. By tapping keys, pushing carriage return levers, and twisting paten knobs, they can record the poem as they hear it and breathe it, producing a score that shows "any reader" how they would want their lines to be reproduced, whether silently or audibly. (pp. xv-xvi)

In the original essay, Olson exposes the role of the typewriter in poetry, and Tedlock reproduces some of that in his preface. But the key element in this argument, for Tedlock as well as for Olson, is the role played by voice and breath in poetry; the challenge of rendering breath on what is ostensibly a silent, squarish, snow-white surface. (Assuming that words are not themselves the repository of meaning.) Tedlock cites Edward Dorn, a poet who spent time with Northern Paiute tribal people in Nevada, where he witnessed a tribal elder perform a death chant. Dorn afterwards described his experience to Olson:

You get caught in the voice. I find myself not even listening, except to the voice, so I can't at that time think of language.

What I heard in the early recording sessions was all of the sound and almost none of the sense. It is not necessary to understand a language in order to become absorbed in the intricacies and resonances of a speaker's voice.

This is complicated; I can't say whether Tedlock is reprising Olson's argument for clarity, or to help readers grasp the implications of Olson's work on Mayan glyphs — which by the way Olson undertook so very long ago — way back in the 1950s! The issue is that Olson's work, and Tedlock's thoughtful exposition, have important implications for anyone engaging with oral materials today — or perhaps especially with POETRY — assuming we can agree with Olson (and with Tedlock, and with Dorn) that poetry has mostly to do with "breath".

This is indeed my view — you can't breathe paper, wet or dry, can't be a fish, gilled up, able to pull oxygen out of the slurry of paper pulp, before it's sheeted and dried into paginal form, a form that can then be adapted to writing (or for making paper airplanes!). Olson (and Dorn) appear to be suggesting that no matter where or at what point you engage with paper, (or the printed page), on entering the domain of poetry the main task is to convey BREATH itself. This is important, because meaning may inhere in breath rather in words per se. Tout court — with poetry.

By the way, Dorn wrote about his experience with the Northern Paiute in The Shoshoneans, The People of the Basin-Plateau, with photos by Leroy Lucas, originally published in 1966. The University of New Mexico Press republished the book in an "expanded edition", in 2013. (The new edition features a new preface, and an appendix consisting of archival materials, including some of Dorn's correspondence, some of his poetry, a transcribed lecture Dorn gave in 1976, and an interview, which happens to be the transcript of a conversation between Dorn and Olson; needless to say, Olson is a towering presence in this volume, as he is throughout 20th century American poetry, and into the present century.)

Here's another version, with Dorn telling Olson about his nonverbal experience, as he heard (rather than listened?) to the Paiute elder's verbal performance that long ago day in the Duck Valley Indian Reservation, elaborating on what Tedlock has already reported of Dorn's experience:

And I heard it literally; I mean, understanding is really beside the point. And I heard it as a death chant. It was piercing, I mean, you know, the thing just went through your body. It was a really beautiful song. I never saw that before, feeling an immediate response from something outside myself. And then, you know, the possibility of its being initial, without cultural reference.

To which Olson responds, "Right, I gotcha…" and then a riposte:

And he and I distinguish

and letting the song lie

in the thing itself.

I can't identify this verse; was it lifted from a poem by Olson? By Dorn? From context I believe Olson had taken this from his own work, and reading at a gathering the previous evening.  By the way, a collection of Olson's lectures and readings and other orally given performances, is cited in The Shoshoneans, and is also included in Tedlock's bibliography. That book is, Muthologos: Charles Olson Lectures and Interviews, Revised Second Edition, Edited by Ralph Maud, Vancouver, BC: Talonbooks, 2010. The website charlesolson.org has a page on this book, where "muthologos" is helpfully defined, amidst discussion of the book's reissue:

George Butterick did not divulge in print why he chose Muthologos as the title for this volume. I think it was because Olson once deﬁned the word muthologos as "what is said about what is said," which has a breadth that would recommend it for a volume that stands as the range of where the poet's mind went in a lifetime's intent to go places. The three volumes of Athenaeus's Banquet were among Olson's favorite books; Muthologos is like the expansive table-talk of the deipnosophists, those called to the feast of the learned. The poems are allowed in as part of the banquet, but the totality is in the life, which was chieﬂy talk. It is in this compilation of transcribed tapes that we get what is preserved of Olson's life of talk; hence the claim, as close as it gets, to totality. (https://charlesolson.org/Files/Muthologos.htm; accessed 7 May 2021)

I cite this partly on account of the emphasis there on TALK, though there is much else of interest, including the proximate reason for my providing this reference in the first place — for its helpful (and suggestive) definition of "muthologos".

Hearing? Listening? I heard the rain pattering on the roof last night, but any meaning in that sound of falling rain would have been imputed by myself to the rain, or the sound, based on whatever association may have arisen then. Meanwhile I listened to a recording of Morton Feldman's For Samuel Beckett (although, depending on my level of attention, or inattention, I may have merely been hearing that music). But this, one might say, is mere twaddle.

More on this matter of writing, and perhaps something more on the ontological status of poetry, later…