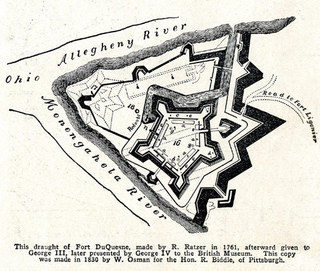 An early drawing of Fort Duquesne, showing the confluence of three rivers forming the Ohio, at what is now Pittsburgh

I've been self-employed for many years, beginning in 1983 when as a graduate student at the University of Pennsylvania I set up in business as an antiquarian bookseller and trader, operating under the name Supper of Ashes Books. My intention was to specialize in antiquarian books, and what was then known in the trade as "occult" materials -- but which for me signified ancient and early science (which would naturally include works relating to magic and alchemy too). As I began doing more and more fieldwork, however, I transitioned that business from bookselling and trading per se, to community-based research. I was able to pursue the latter on a full time basis until quite recently.

Having relocated to Vermont, I'm focusing much more time on writing, which involves both poetry and any nonfiction written over the years, some published and some not, but which also includes the many field reports and related materials I've generated. That said, I'm also devoting some time and energy to developing a field-based project here, since fieldwork has been my modus operandi for so many years, as well as a source of ideas and inspiration. I'm not quite ready to give that up.

I do however want to explain the title of this blog. I moved to Pittsburgh in 1992, and worked for a regional organization there for about a year before leaving to go back on the road as a self-employed fieldworker, working on a contract-by-contract basis. Soon after arriving in Pittsburgh, I learned that the steel city had a special though perhaps less well-known relationship with Varanasi, a religiously significant city in India, on the banks of the Ganges. Simply put, the relationship or correspondence between the two cities involves rivers. Many people are aware that Pittsburgh is known as the city of three rivers. What is less well known is that there's a fourth river, an ancient river that had once flowed beneath the city, and is still flowing underground in some areas. I suppose that this fourth river functions something like an aquafer, much as the great Cohansey Aquafer does in southern New Jersey.

Varanasi, also known as Benares, is a city of three rivers too, but there is also a fourth, hidden river flowing underground, much as in Pittsburgh. Having had a longtime interest in India, especially Indian poetry and philosophy, I quickly decided to name my fieldwork business "fourthriver". I went ahead and registered the name with the state of Pennsylvania, but never registered the domain name since I saw little need for keeping a website at that time.

But why did I adopt the name "fourthriver" so quickly? The answer is simple. I recognized almost immediately that the concept of a fourth or hidden river -- "fourthriver" -- perfectly expressed what I conceived my fieldwork to be all about. Which is to say, it has been about exploring and uncovering the hidden or unexpressed cultural resources in the many locales where I've worked over the years. This is especially so since as a folklorist, I've focused my attention on vernacular rather than on "official" culture; on local practice and local knowledge rather than on mainstream knowledge and practice. There's much more to say about that subject, but I'll leave it there for now.

I originally thought you where a little daft about four rivers living in Pittsburgh, but I just got educated on that fact, and the local knowledge that will always supercede anything on Google!

Thanks, Ray. As it happens there are at least two other businesses or organizations that use some version of the fourth river concept. One of them is an engineering firm, the other is a research group based at Carnegie Mellon University. I’d only add that to my knowledge I was the first to use that name.

Wow, I, of course, know nothing about your man Kelpius (until now) but I understand being driven by historic details. Larry and I have been snooping every local, interesting, historic site that we can find but not with depth like you. Lately, we've explored dinosaur footprints on the Watchung ridges and sneaky little spots that George Washington utilized but no good publicist at the time (or now) amplified. These spots are also on the Watchung Ridges. The iron furnaces in Boonton are hidden by time and there are also great geologic wonders a spitting distance away. Civilization that was formerly in the Great Swamp, we find traces of, then study Google Earth for more clues. Even behind my house, there are remnants of a brick industry along the river, post colonial shell mounds and post colonial broken "pottery". In Long Island too, we get distracted by all the Loyalist stories and landmarks that just didn't have publicists for the watered-down pablum textbooks children are warped by.