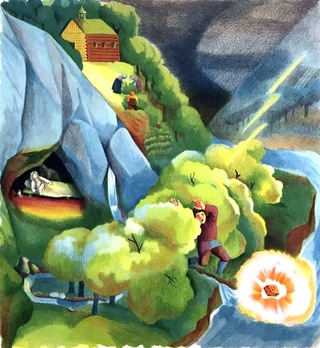 What follows is a truncated, generalized account of the background to the Kelpius story (see my previous post).

In 17th century Germany, Kelpius was part of a growing movement of dissent from orthodox Lutheranism, whose members were persecuted as a result of their nonconformity. Self-identifying as "pietists", they were intensely devout, striving to develop a personal relationship to God independent of intermediaries such as the clergy, or the establishment church. Though initially a marginalized movement within Lutheranism, pietism spread rapidly throughout Europe, and would ultimately gain considerable influence in North America, among the various German-speaking immigrant groups who settled there.

I might add that Kelpius and company were inclined towards mysticism, and especially the work of the great German mystic, Jakob Boehme. Their plan was to emigrate from Germany and settle in the New World, where they would establish a utopian community. Johann Jakob Zimmerman, their leader, was a noted astronomer who had observed a rise in the frequency of comet activity in the skies over Europe through the 1680s. He concluded that this must portend the imminent Second Coming of Christ, and predicted that the long-awaited event would occur in 1694. On that basis, the group decided to leave Europe post haste, to greet the millenium in America.

They traveled to London to finalize plans for the voyage. Unexpectedly, however, Zimmerman died on the eve of their scheduled departure, and Kelpius assumed leadership of the group. The remaining members – some believe that the first Rosicrucians to arrive in North America were among them – boarded the Sarah Maria of Good Hope, and set sail. The ship docked at Philadelphia in June 1694, and the group set about establishing their settlement on the banks of Wissahickon Creek, near Germantown, which at that time was an outskirt of Philadelphia. At that location they established a medicinal herb garden, composed original music, and built an observatory, all the while watching the skies for signs of the Second Coming. This was the community that Josephine Herbst has described so effectively, in her book on John Bartram.

Kelpius died in 1708, but has since become a legendary figure, possibly due to miracles he is supposed to have performed, and partly based on his reputation as a wizard and mystic, meditating in a solitary cave located somewhere above the Wissahickon Creek. It's believed, for example, that Kelpius performed miracles at sea, in one instance saving the Sarah Maria from certain destruction during an especially violent storm. He is also looked upon as a master healer among the braucherei* of the nearby Pennsylvania German community. Indeed, over the years Kelpius has acquired a reputation as the "Wizard of the Wissahickon", or "Hermit of the Wissahickon". Undergirding this legendary status, Kelpius was said to have possessed the Philosopher's Stone, or some part of it  -- that elusive, magical object coveted by alchemists, who believed that, possessing it, they could transform base metals into gold.

Also according to legend, as Kelpius lay on his death bed within his hermit's cave among the rocks above the Wissahickon, he asked a follower to throw a small casket into the waters of that creek, or perhaps the Schuylkill River. The follower hastened away, then returned to report completion of the mission. Of course, he hadn't actually thrown the casket into the water, believing that its contents were sacred, or otherwise valuable. Kelpius was not fooled, however, and repeated the command. This time the follower obeyed, and as the casket hit the water there was a powerful explosion and a blinding flash of light. That box is believed to have contained the Philosopher's Stone.

For information on the brauche or Pennsylvania German powwow tradition (not related to the Native American pow wow), see materials relating to an exhibit put on recently at the Glen Cairn Museum in Bryn Athyn, near Philadelphia by visiting: