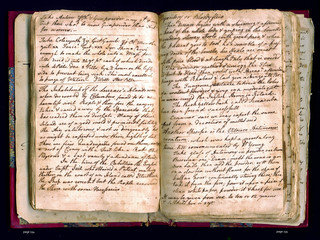 Pushing the current thread a bit further, I want to mention another person who's been very supportive and helpful, and taken a genuine interest in the historical figure of Kelpius. Joel Fry is the archivist at Bartram's Garden in Philadelphia, where he has been working with the voluminous papers of John Bartram, and conducting his own research into that period of Philadelphia history. I should note that Joel was among those attending the McNeil Center meeting I wrote about in a previous post. I might also note that it was Joel who recommended I read Josephine Herbst's book on Bartram, wherein I discovered the brief reference to Kelpius, and which launched my ongoing interest in him. Witt is mentioned in the Herbst paragraph, and he's also mentioned by Bartram in several of his letters. For example, writing to Peter Collinson, the London-based naturalist, in 1743, Bartram recalls a recent visit with Christopher Witt:

I have lately been to visit our friend Doctor wit where I spent 4 or 5 hours very agreeable sometimes in his garden where I viewed every kind of plant I believe that grew therin which afforded me a Convenient opertunity of asking him whether he ever observed any kind of wild roses in this countrie that was double   he said he could not remember that he ever did  so being satisfied with this amusement we went into his study which was furnished with books containing different kinds of learning as Phylosophy natural Magic, Divinity, nay even Mystick divinity all of which was the subjects of our discourse within doors which alternately gave way to botany every time we walked in the garden…

What's striking about this paragraph is first, the description of Witt's library, with its books devoted to "different kinds of learning", but also Bartram's judgment that Witt seemed most at home in the environment of his garden.

John Watson, whose Annals provide an interesting perspective on Philadelphia history through the 19th century, provides a neat summary of Witt, taking note of the variety of his activity while also emphasizing the mystical pursuits of his subject:

DOCTOR CHRISTOPHER WITT  was born in England (in Wiltshire) in 1675; came to this country in 1704, and died in 1765, aged 90.  He was a skilful physician and a learned man; was reputed a `magus' or `diviner', or in grosser terms a `conjuror'; and was a student and a believer in all the learned absurdities and marvellous pretensions of the Rosicrucian philosophy.  The Germans of that day, and indeed many of the English, practised the casting of `nativities' -- and as this required mathematical and astronomical learning, it often followed that such a competent scholar was called "a fortune teller".  Doctor Witt "cast nativities", and was called a conjuror; while Christopher Lehman, who was a scholar and a friend of Witt, and could cast nativities, and did them for all of his own nine children, but never for hire, was called a notary public, a surveyor, and a gentleman.

The persistence of these sources in identifying Witt with natural magic is significant. And in fact, Witt was probably among that small but significant group of distinguished individuals known as "cunning folk". As English historian Owen Davies explains in his book Popular Magic, Cunning-folk in English History:

The cunning element of cunning-folk comes from the Anglo-Saxon cunnan, meaning to know. Wizard similarly derives from the Old English wis, meaning wise, so can be seen as a variant of wise-man. Both definitions tell us something fundamental about how these people were perceived. They were individuals who stood out in society for possessing more knowledge than those around them, knowledge that was acquired either from a supernatural source, from an innate, hereditary ability, or from being able to understand writing.

The reference to writing is interesting, but I'll not pursue it here, not just yet. However, and to continue, Witt is widely believed to have been a doctor specializing in herbal medicine -- which is why a recent discovery by Joel Fry is of such great interest. Working with a Commonplace Book kept by William Bartram (son of John Bartram), Joel came across a reference, in William Bartram's handwriting, to an herbal formula which Bartram attributed to Christopher Witt. He noted this down as the "star pill" formula, and then gave the recipe.*

The ingredients of Witt's Star Pill formula appear to be as follows: "colicynth" (probably colocynthus citrullus); "gamb" (possibly gamboge, or garcinia hanbury); and "ol mentha", (possibly oleum menthae, or essential oil of mint).  The fourth and final ingredient in this formula, written here as "Fenicis" is probably fennel, whose botanical name is foeniculum vulgare.  Fennel is a carminative herb, and possibly operating in conjunction with mint, might be present to ameliorate the potentially toxic effects of the main ingredients.

The formula can thus be divided into six parts: 1. the initiation of the process (indicated  by the opening word of the formula, "take"); 2. a list of ingredients and their proportions; 3. the mixing of ingredients and forming of the pills; 4. dosage ("dose 3 Pills");  5. special instructions for the patient ("lye 2 hours on the left side"); and finally, 6. a clear indication of the efficacy of the pills ("most excellent to purge off water").

At some point I may want to revisit this subject, to describe the formula ingredients in greater detail. I present it here, however, as a tantalizing fragment pointing to Witt's activity as herbalist, and to the Bartram family's continuing relationship with him.

*In a personal communication dated 27 October 2011, Joel Fry suggested that if I were to publish the star pill formula, I use the following credit: