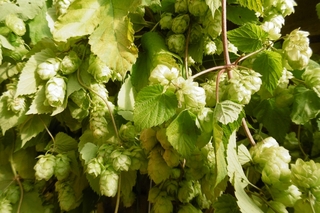 Humulus Lupulus in the Linnaean classification, otherwise known as Hops

Some random but loosely connected thoughts in initiating this series. I first encountered the word oast while doing fieldwork in Charleston, South Carolina. There's a craft brewery and taproom there called Edmund's Oast, a popular place featuring good beer in plentiful variety, great food, and a convivial crowd of regulars. That one evening, as I sat at the bar waiting out a tornado warning, I sipped a perfectly made negroni that was available there on tap. Which seemed strange, though as I thought about it I recalled having a decent red wine drawn from a spigot at a bar in the Adirondacks, and thinking it over still more, I remembered imbibing an excellent boulevardier, pre-mixed in quantity and tapped to order from a small keg at the Farmhouse Restaurant in Burlington. Back then in Charleston, however, oast wasn't part of my vocabulary. Until recently.

Over the past few weeks I've begun working on a new project, whence I hope to produce some writing for publication on this website and elsewhere. But first, some background. Some years ago I'd written an article for American Public House Review, published online at americanpublichousereview.com (I've posted that article, Tessaro's, in the "Works" section of this website.) Which gave rise to a thought. After relocating to Burlington and setting up as a writer, it occurred to me that, given the robust nature of the craft beer industry in Vermont, and the many taprooms and pubs offering Vermont ales, that I might write a series of articles on those pubs and taprooms for that selfsame online publication. So far, that hasn't panned out – it's not clear whether APR is still publishing articles these days. Undaunted, I decided to develop the series anyway.

I've mentioned that I'm a fieldworker, and that I've made a living doing contract ethnography for many years. But I may not have mentioned that fieldwork has been a constant source of inspiration for me, feeding my writing and providing a sense of connection that isn't available to me sitting solo at my desk. So then, seeking to hit upon a workable balance between writing and fieldwork, I decided to approach the new project ethnographically, and venture forth once again into the field. Of course, given the nature of the project my first question was, what's at the back of beer? What provides the distinctive taste experience of a well-made ale? Of course, that's an easy question to answer: HOPS!

The really interesting discovery, however, which is widely known but was unknown to me until recently, is that in some cases, the hops used to brew local beers are sourced locally, from growers in Vermont. As it happened, this interesting tidbit would provide entrée into what was already emerging as a viable fieldwork project: identify local hops growers, visit their farms, and explore their relationship to the local brewing industry. That would make a good start to what I believe can be developed into a much larger project.

Before launching into fieldwork, however, I wanted to learn more about local beers. As it happens, there exist a couple of fine books on the subject. The one by Kurt Staudter and Adam Krakowski is especially good, detailing the history of craft beer in Vermont, rendered more or less chronologically, beginning with the first pub to open in Vermont -- in Burlington as it happens -- then covering the many subsequent developments till recent times (their book was published in 2014). That first brew pub, by the way, is the Vermont Pub and Brewery on College Street, established in 1988 by Greg Noonan and still going strong. (Noonan himself wrote an influential text called Brewing Craft Beer, published in 1986.)

Staudter and Krakowski's book is Vermont beer: History of a brewing revolution. (Interestingly, though purely coincidentally, their book was published at Charleston, South Carolina, where I myself first learned the word oast!) Adam Krakowski has also researched 19th century hops production in Vermont, under the auspices of a grant from the Vermont Historical Society, who published his results in their journal, Vermont History (Volume 82, No, 2, Summer/Fall 2014). Needless to say, Adam Krakowski's work is foundational.

I felt, however, that my approach would be different, providing a more comprehensive and possibly more in-depth perspective on craft beer and other artisinal products grown or produced in Vermont, by focusing on the many individuals who contribute in many and various ways to the presentation of Vermont terroir. Beginning with hops farmers, I could gradually widen the project's scope to encompass much related activity, such as grain farming (for use in distilled spirits as well as beer), malting of grain, distilling, and maple sugaring (a common ingredient in Vermont beers and ciders, especially during the sugaring season). I could also explore the very interesting worlds of beekeeping (important in flavoring some beers and some distilled spirits, not to mention the array of products made from honey), and herbalism more generally, including research into hemp farming -- because hemp and hops are closely related botanically.

Hoping to learn whether anyone was already engaged in such a project, I got in touch with Richard Watts, director of the Center for Research on Vermont, who offered to circulate a brief description of my project to members of the Center's listserv. I provided something to Richard, and he quickly sent it out. That message has already produced a number of very helpful responses. I later revised the text a bit, and have since sent it along to other individuals as a way of introducing myself and my project to them. I'll wind this post down by including the most recent version of that introductory message:

I'm a folklorist and oral historian with lengthy experience as a contract ethnographer, working in communities throughout the northeast and other parts of the country for nearly 40 years.  I've recently relocated to Vermont on a full time basis.  While doing exploratory fieldwork here, I've become interested in hops farming in the region, though my plan is to gradually expand the project to include grain farmers and maltsters who supply the craft beer industry, and to clarify that network of relationships.  In addition, I also want to explore farming or foraging activities somewhat related to hops, under the broad rubric of herbalism — the hops plant ( and botanically related plants such as hemp) is well known to herbalists besides being of long-standing interest to brewers.

Having begun working on this project, I'd be interested in learning about others who are working or have worked with communities of farmers and foragers in Vermont, either directly or tangentially while working on other projects.  More immediately, I'd also be interested in knowing of any contacts or leads among hops growers and grains growers statewide, and related processors.  I suspect that the hops and hemp growers community in particular is relatively small, with hops playing a minor role within the more diversified agricultural or horticultural activity of smallholders.  At some point I expect to widen the hops research to incorporate work with brewmasters, and do fieldwork at sites of consumption such as taprooms and brew pubs.

I want to emphasize, however, that alongside the hops project I hope to significantly broaden and deepen that work to develop relationships with herbs growers, wildcrafters, foragers, and herbalists, especially those community-based individuals who function within longstanding and somewhat localized traditions of botanical knowledge and practice.

I'd appreciate having any information or suggestions that readers of this query can provide.  For information on my background, please visit my website at tdcarroll.com. I've only just begun to  build the website, but expect to begin incorporating Vermont fieldwork there in the relatively near future.

In my next post, I'll introduce some historical material gleaned from research I conducted in the archives at the Vermont Historical Society in Barre, in this case relating to hops, though I plan to do archival research on related topics as this fieldwork project unfolds. In that next post I'll also revisit the subject of oasts.

*Hops Hemp Herbs is my working title for this project.