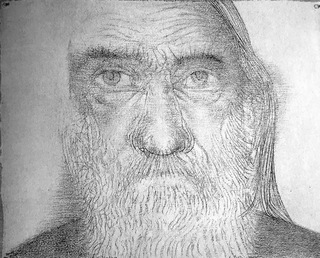 I was reading through a book I received from the wonderful Siglio Press, now located in the Hudson River Valley, but first established in Los Angeles in 2008. That book is Several Gravities, a book of collages, with interpolated poetry, by Keith Waldrop, the well-known, highly regarded poet and founder, with Rosemarie Waldrop, of Burning Deck Press, a significant publisher of poetry chapbooks. I may want to say more about Burning Deck and other small presses later on, since it connects to an earlier post on this website. But meanwhile I want to look briefly at Waldrop's book. While I've been aware of his poetry and his publishing activity for some time, I hadn't known anything of his artistic work -- until I received that book from Siglio.

In a brief introductory essay, "A Matter of Collage", Waldrop describes his collage-making practice, and its significance to his poetical practice. In describing how he developed the poems for Transcendental Studies (2009), he notes that he lifted lines from three or four books by other authors and made them into poetry. Waldrop recalls that:

The words from these books were chosen, so not absolutely random, but chosen quickly, paying as little attention as possible to content or context, much attention to sound. Once the words had become lines and stanzas, I felt at liberty to change words, to throw out stanzas or lines – in short, to revise – since my purpose was not to demonstrate possibilities of collage, but simply to find poems.

Sound! (See my blog post on this website dated 7 May). The passage is interesting for associating poetry with collage in Waldrop's work (collage forming as it does the core of Several Gravities), but also because in his accounting, Waldrop seems to assign words to supportive or secondary status in his poetry. (Sound again!)  In an essay written for this book, Robert Seydel evokes the complexities of Waldrop's artistic practice:

A multiple ground rises there as an originary confusion between the word and the mark, the song and the gesture, sounds and colors. This is not necessarily turmoil, but an opening rather, often ecstatic, into spaces of a perhaps primary coalescence of mind in its high vision and density of response to world.

This "opening", according to Seydel, may provide a key to Waldrop's art, suggesting a productive "originary confusion", with the two forms – poetry and collage – nourishing (influencing) one another:

What is enunciated and what is withheld in one medium rhymes with the enunciations and absences in the other.

Yes. But then he adds:

I don't know that Waldrop would necessarily agree with this, or with the general tenor of

these remarks. I have heard him say, for instance, "I turn to collage to get away from words."

In the first number of a chapbook series titled Inscape, published Spring 1998 by Instress/Leonard Brink, there's a poem by Waldrop titled "An Unknown Tree", which contains some verses relating to words. In fact, the poem begins as follows:

I look for the

word worth a thousand

the form of the root

And a little later:

A word does not come to mind.

Maybe not yet a word.

And finally, to close the poem:

and here, with all these

But suspecting speech in noises, I listen for ambient

signals, the ground from which words figure.

Advantages of an alphabet.

In closing I feel I want to include the following, which appears toward the end of the poem:

real than the opaque bodies which cast them or, for that

matter, the source of light, the sun.

Perhaps Waldrop was able to find refuge, of a sort, in collage.

By the way, there's no indication that Leonard Brink was involved in any way with "The Eighth Day"; he's not credited in the colophon. Brink was at that time publisher of Instress, the small press which published the Inscape chapbooks featuring Waldrop's work (and the work of other poets too).

At about the same time these two chapbooks appeared, Brink put out his own work in a chapbook called "Secrets of the Universe", published by HOPHOPHOP Press in New York (1999). It may be of interest that Brink also touches on the issue of words, or semantics. In his story, a fieldworker, possibly a student, is describing his experience among the "Lushondurobo" people, who live in "Rhondesia" and speak a language called "Rhondesian". Brink gives a humorous depiction of the misunderstandings that can arise in translation. Here's an example:

My Rhondesian was so bad at first that I invariably heard Jeff to say either, obsequiously, "I am thrilled to melt into an orange road, master," or irritably, "It'll be a dry day when I'm through licking the envelope."

Brink's Lushondurobo story offers a return to "sound". In previous posts I wrote about Charles Olson, and about epic poetry -- which had been composed/performed as oral poetry prior to the adoption of the Phoenician alphabet by the Greeks. But there are other ramifications to oral poetry which I think should be separated and distinguished from my usage in these posts. For instance, Edward Hirsch devotes an entry to "sound poetry" in his A Poet's Glossary, where he writes that,

Sound poetry generally refers to a type of poetry that aggressively foregrounds the sounds of words. It is performance oriented and seeks to override conventional denotative and syntatical [sic] values. It goes beyond the page, beyond logocentrism, so that sound alone dominates. Sound poetry has its roots in preliterate oral traditions, in tribal chants and magic spells. The more extreme that nonsense poetry becomes, repressing sense, the more it tends toward sound poetry.

I don't think this is what Charles Olson, or Ed Dorn, or Dennis Tedlock meant by suppressing word sense to foreground "sound", though Hirsch touches on issues that correspond very broadly with the intentions of those writers. Other entries of interest in Hirsch's glossary are "Wordless Poetry", "Drum Poetry", and "Oral Poetry". I may want to address these parallel poetry universes at some other time...

Meanwhile, check out the Siglio Press website at www.sigliopress.com.