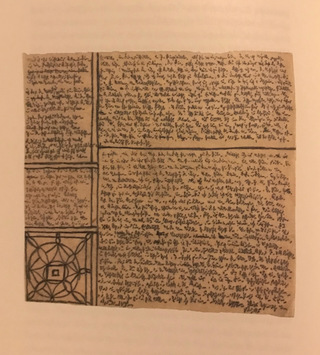 Robert Walser, "A Will to Shake That Refined Individual", in Robert Walser Microscripts, Translated by Susan Bernofsky

I like to employ diverse technologies in composing poems and other texts (including blog posts), a writing practice that's loosely organized around the separate workspaces I've set up in my office — a sit-down writing table, a standup desk, and a shelf extension where I consult printed reference materials. These workspaces are interchangeable in practice, with the exception of an oakwood library chair, reserved for sitting and reading. All of these workstations are situated within a totalizing space of about a hundred square feet! — and where the majority of wall space is committed to shelving for books. Whenever possible, as I say, I diversify my writing qua writing practice, using either the computer, pencil on paper, or ink (fountain pen or quill), on paper. There's drawing paper on hand too, along with a variety of inks, pencils and pens, charcoal, and other tools such as compass, rulers, protractor.

At home in Philadelphia between field trips, I would routinely walk through the city neighborhoods, visiting especially the many small, independent galleries and bookshops. In Old City one day I walked into a small gallery and began looking at the paintings hung there. Very soon the owner — an artist — emerged from an adjacent room. We talked. At the time I was actively doing fieldwork, traveling wherever that took me, and when I mentioned my work, he became interested and made a leap, encouraging me to begin drawing to capture whatever insight -- esoteric, hermetic -- resulting from my relinquishing the familiar spaces/places, to approach the distant the unfamiliar the unknown (opposite/oppositional-spaces/places) — not mirrors — spaces/places closed or veiled — typically available to those on the inside, unavailable to those on the outside. Such was the nature of our conversation that day.

I wrote the following to a local artist in December 2009, relating to a project I was working on at the time:

Beyond all that, I also agree that we need to make more contact in the neighborhood itself, with new people. Remember the Lao monk that rainy Saturday when we visited Koune? [This was a recent visit to a Lao Buddhist temple in Philadelphia.] He was so expansive and expressive, but we really couldn't 'understand' much of what he was saying. But he talked, and we listened, and it worked. Fieldwork is like that in general. But more particularly, we need to explore that sort of communicative potential at large in the neighborhood and find social spaces where we really don't know what's going on or what people are saying, but we are anyway involved in some sort of deep engagement whether with English speakers or others that will produce something authentic, uncontrived. Interesting how that something could just as well be babble rather than words, or that it begins with babble, in any case, language notwithstanding.

And several years later, a note to myself:

"Discovery" on BBC this morning 9 September [2016] aired in the 3am hour sounded interesting -- about risk in scientific research and related issues in the context of the historical development of certain lines of inquiry and also I think and perhaps especially the idea of error as part of the shaping and production of knowledge and ultimately the political dimension of science and its applicability. At the moment I tuned in and began to absorb what I was hearing I'd been thinking about writing about fieldwork and all the indeterminacies associated with that. There was something on the program about "setting the meter" incorrectly, perhaps in an experimental process, with that error being carried through and shaping the outcome importantly, which dovetailed somehow with my own thought process at that moment, fieldwork such as it is being fraught with "error". For example, my idea of note taking and listening within a time rift that inhibits or restricts perception of the actual information being provided while simultaneously opening doors or windows of perception onto realms of intuitive -- or counterintuitive -- "meanings" not otherwise available in everyday discourse. So we do fieldwork not fundamentally in order to document and record information or manufacture data, but to set up conditions to achieve or gain access to these other realms.

Standing and talking in that storefront gallery space in Philadelphia, I realized that the artist had intuited something fundamental and important. I agreed that, yes, I've long felt that drawing could be a way to free my hand, which held a position at the threshold of those intimated worlds. The artist suggested I contact a friend who was (at that time) an instructor at the Slought Foundation in Philadelphia, suggested I explain that he was commending me to him, that I join the friend's drawing class at Slought. I did write to him, and was invited to join the class — but didn't follow through — probably because I had to leave town for the next fieldwork gig.

Cultivation of drawing skills aside, I do work with fountain pen, with inkwell and quill, with pencil and paper, which I believe are significant affordances of drawing. With this in mind, I looked through a book called Untitled Passages by Henri Michaux, having just re-read Michaux's essay on the Chinese written character, while awaiting arrival of a replacement copy of Fenollosa's essay, thinking to do some writing on the subject. Of course, the Fenollosa essay had been influential for Ezra Pound, and consequently for later generations of American poets.

So I picked up this other book by Michaux, which as it happens is the catalog for a museum exhibit of Michaux's drawings, and right away found a prefatory note titled "To Draw the Flow of Time" — where he writes that he had been drawing 'the consciousness of existing and the flow of time' but was producing 'scarcely more than one or two or three lines meeting up here and there with a few others…' Until a publisher wanting to reproduce some of the drawings said, 'All you have to do is make them bigger.' HM protested, seizing hold of a brush to demonstrate that "bigger" was impossible — but —

As I drew the first lines I felt, to my extreme surprise, that something that had always been closed had opened up in me, and that this breach was to afford an outlet for a mass of movements.
The fulness of the gesture necessitated by the characters that were supposed to come out bigger had changed the spirit of the drawing. Instead of characters, instead of notations of an undefinable 'something,' they became propulsion, participation, released torrent.

Michaux sometimes made drawings after ingesting mescaline or lysergic acid (mescalin especially). A selection of the mescaline drawings is included in the catalog, along with others of interest — there is a number of "alphabet" drawings — figures arrayed in a tabular format on the page. Interestingly, there are also several "movements" drawings, some also with figures arranged in more or less tabular format. These drawings open vistas too expansive for my purposes here, but I'll return to them in a future post.

In contrast to Michaux, the great Swiss writer Robert Walser spent the closing years of his life in a sanitarium — his everyday outer experience was one of confinement. And he too turned to writing "strange" — adopting what appeared to be an esoteric script, or code —producing a number of "microscripts." Susan Bernofsky, Walser's translator, describes them as "narrow strips of paper covered with tiny, antlike markings ranging in height from one to two millimeters," which were assumed to be indecipherable scribbles. But two scholars, looking more closely, identified them as writing per se, a "radically miniaturized" German script called Kurrent — "the form of handwriting favored in German-speaking countries until the mid-twentieth century, when it was replaced by a Latinate form similar to that used in English." As Bernofsky explains:

Kurrent is medieval in its origins, all up-and-down slanting angles. It is a form of script better suited to compression than modern handwriting, though its graphic simplicity — an e is represented by a simple pair of vertical ticks like a quotation mark, an s by a mere slash — means that shrinking it down results in a dramatic loss of detail and comprehensibility.

It seems that Kurrent may be likened to a "secret" code after all! Bernofsky's description is strikingly like Michaux's account of his drawings prior to being asked to "make them larger," which helped Michaux to free his hand. Walser too had issues with his hand. Bernofsky quotes from a letter Walser wrote to a publisher —

I can assure you (this all began in Berlin) I suffered a real breakdown in my hand on account of the pen, a sort of cramp from whose clutches I slowly, laboriously freed myself by means of the pencil… So I experienced a period of disruption that was mirrored, as it were, in my handwriting and its domination, and when I copied out the texts from this pencil assignment, I learned again, like a little boy, to write.

Bernofsky concludes: "By his own account, then, Walser began writing in a tiny pencil script to combat a sort of writer's cramp." There seem to be unmistakable parallels between the very diverse experience of Walser and Michaux -- both confronting limitations posed by the hand, both finding freedom by using the hand differently, eclipsing the writing/drawing they'd previously done to open new vistas of outlook and expression.

I'll close by citing an interesting little book by the Italian architect Paolo Belardi titled, Why Architects Still Draw. Having quoted Leonardo on "the rivalry between pen and pencil" Belardi offers a sort of rapprochement that may be apposite here:

Though if we look closely, there isn't any real competition or conflict between writing and drawing…I've always been charmed by the rhetorical finesse with which the great poet Marino Moretti attributes the fragility of the written word to the ephemeral nature of the pencil.