What's so special about Paterson? 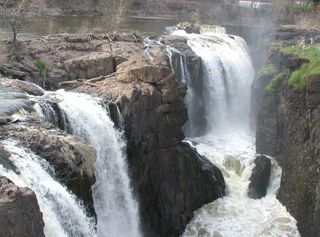 In this post I reflect on a question that's been on my mind for many years – the special nature of my hometown of Paterson, New Jersey – and briefly explore the reasons why people feel so deeply about the city. Given the shared nature of the question, I touch here upon psychogeography, which, coupled with what I believe are powerful and affecting symbolic forces in play at Paterson, help to create an authentically singular place.

A Chat with the Mayor

I've always felt that Paterson is a special place. An authentically singular place. While working on the Paterson project for the Library of Congress, I had the opportunity to meet with then-mayor Bill Pascrell, who has since gone on to Washington to serve in Congress. We met in his office that day of our meeting, and the first thing he asked was, "Why is Paterson so special?" At first I could only marvel that we two natives had separately arrived at a shared understanding of the city. I recovered, and tried to answer, though my reflections didn't satisfy either of us. Mayor Pascrell shook his head, I shrugged my shoulders, and we moved on.

I've thought about that conversation quite a bit since then. Here's my current thinking. First, Paterson is relatively small – it's about two miles in any direction from the geographic center of the city. Second, it's clearly outlined by the Passaic River, which flows "over" Paterson. Meaning, that on reaching Paterson the river flows north, looping over the top of the city to form a kind of dome, then flowing south to form the eastern boundary before continuing onward towards its ultimate destination at Newark Bay.

This feature alone may qualify Paterson as a propitious locale. But there's also the Passaic Falls – the second highest waterfall east of the Mississippi. Those falls long ago convinced Alexander Hamilton to promote the Society for Establishing Useful Manufactures (S.U.M.) at Paterson, in 1791. Hamilton imagined that the falls would form the nucleus of a planned industrial city at that site. Pierre L'Enfant was enlisted to design an elaborate system of raceways to deliver waterpower to local manufactories, and the plan took on life.

The S.U.M had a rocky beginning, though it would eventually succeed quite well, and according to expectations. But I mention the falls for their symbolic power rather than their historical interest. The falls are more or less centrally located – a bit to the west of center – within the small geopolitical space of the city. Situated on the edge of downtown, overlooking the historic mill district, located within relatively easy walking, busing, or driving distance from every city neighborhood, they play a significant role in everyday life, but more specifically, in the formation of local consciousness. It's as though everyone is touched by the falls at a psychosensory level, and perhaps that, having once experienced the visceral impact of the falls at first hand, people can subsequently "hear" or "feel" them wherever they may be in the city. The Passaic Falls, cascading within the enclosure formed by the looping river, have been useful for power generation, but beyond that, they produce an intensity of experience that arises within the individual self, then radiates outward to form a widely shared experience.

Of course, Paterson has its problems – poverty, crime, inadequate food and housing, lack of opportunity – but for the most part, other residents I've spoken with feel the way I do about the city. So what's so special about Paterson?

After moving back to Philadelphia from Pittsburgh in 2003, I was determined to identify a local fieldwork project. I'd continue to travel, but I wanted to dig more deeply, and have the opportunity to follow up. To make a very long story short, I discovered that opportunity in Camden, just across the river from Philadelphia.

At that time, Camden had the highest homicide rate in the country. It was ravaged by poverty, by crime, and in my view, by corruption too. Development dollars had been pouring into the city, with little tangible result showing in the neighborhoods (Cooper Medical Center was benefiting, as it grew into a major regional provider around that time; so too had the waterfront been developed for tourists).

Meanwhile, I was hired by a local arts organization and began going over to Camden on a regular basis. I don't own a car, so most days I took the PATCO train across the river to Camden, or walked across the Ben Franklin Bridge. Once there I continued walking, from station or bridge, fanning outwards into the neighborhoods. Although the city may have been a dangerous and difficult place, people there still love, work, raise kids, gather, party, and garden. Which is to say that people carried on in the Camden neighborhoods pretty much as they do everywhere. The neighborhoods tended to be lively places, as in Paterson. I felt comfortable being there, and was soon able to develop a functional network of contacts.

My first experience of the city was in North Camden, and the place at once seemed strikingly familiar. Examining that feeling, I quickly realized that Camden felt very much like Paterson! Maybe it had something to do with the layout of streets, the arrangement of houses, the people? I didn't know. But when I took bus or train through the city to some faraway destination, as I sometimes did, it was clear that, seen from a broader perspective, Camden is actually quite unlike Paterson. So what had produced that feeling of sameness, and recognition?

I've always worked extensively with maps. And of course, doing fieldwork in the days before GPS, I relied on paper maps and atlases to navigate to various places, and find my way around once on site. I still do. I also use maps to plot any significant social, cultural or geographical features I've identified while doing fieldwork. When I first looked at the map of Camden, I was surprised to find that, like Paterson, it too was enclosed within a dome formed by a river – or in this case, two rivers. At Camden, the Delaware River flows in from the north, forming the western boundary, but also edges easterly, spreading out over the top of the city to meet the Cooper River, which flows in from the south and east. To the south, Newton Creek feeds into the Delaware, jabbing inland to form a truncated southern boundary. Newton Creek has silted up quite a bit over the years, but at one time it had formed a confluence with the Cooper River, forming Camden into an ad hoc island.

In Camden, I found the same shared feeling among residents that I'd discovered in Paterson. But in Paterson, I hadn't associated that feeling with the doming river until I arrived at Camden and noticed that the geography, and the riverine context, were quite similar in both places. Both cities have roughly the same land area (just under 9 square miles, though Paterson is the more densely populated). Camden doesn't feature a significant waterfall, but the Philadelphia skyline is visible to the west, and exerts a palpable influence throughout the city. Perhaps that looming skyline, rising into view across the majestic river, provides the same symbolic punch that the waterfalls at Paterson do! That, and the two river "domes", may suggest an answer to my longstanding question.

The foregoing is speculative, and impressionistic. But my feeling is that everywhere, our sense of place touches some fundamental part of our humanity, and profoundly influences our experience of being-in-the-world. Which may suggest why the felt experience of living in Paterson — and Camden too — inspires a feeling of uniquity among the people who live in those places.