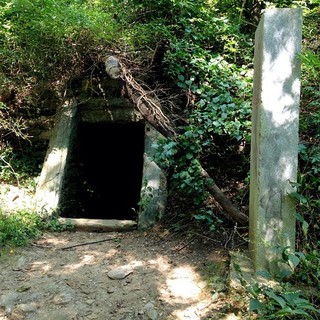 The "Kelpius Cave" of legend. The monument visible at right was erected by AMORC (Ancient Mystical Order Rosae Crucis). The group dedicated the monument to Kelpius, in recognition of the deep historical relationship between Kelpius and the Rosicrucian community.

Okay, maybe the Kelpius thread on this blog has a little more life remaining than I'd thought. I've mentioned Jim Green at the Library Company in a previous post, but failed to mention that Jim has been very supportive of the Kelpius Society. He's hosted meetings and programs of TKS, gathered Kelpius-related materials in the collections of the Library Company and displayed them there, and has always been responsive to requests for information or guidance in doing research on Kelpius. My aforementioned meeting with Jim involved a project I was attempting to organize that would explore the multi-faceted Kelpius story in conjunction with scholars, museum professionals, librarians, archivists, and interested others, resulting in an evolving schedule of programming -- exhibits, symposia, special events -- that would tell that story in more detail, and with more authority than has been generally available to the public.

To that end, we organized a meeting which was hosted by Dan Richter, director of the McNeil Center for Early American Studies (MCEAS) at the University of Pennsylvania. Here's the major portion of the letter of invitation I sent out prior to that meeting, which provides an outline of the scope and the potential for an in-depth exploration of the Kelpius story. I should add that the project was initially conceived as a transatlantic exhibit project with counterparts in Germany, as I note in the first paragraph of the letter:

During the past few months I've met with a number of you, and reached out to others, to discuss a project that we at the Kelpius Society are planning with a group of scholars and art historians located in Bonn, Germany, that would be devoted to Johannes Kelpius and his community. Our ostensible, initial objective had been more narrowly focused on developing a trans-Atlantic exhibit (with related programming) that would address Kelpius's early years and education in Transylvania and his later activities in Germany before emigrating to North America, while we for our part would clarify the historical experience of the Kelpius community on this side of the Atlantic, touching on the significance of that group in the historical development of Philadelphia and on related matters.

As you know, Kelpius as historical figure suggests many and varied subjects, beginning with his establishment of a utopian community along Wissahickon Creek, but incorporating diverse interests such as early music, herbalism and herbal medicine (with possible implications for the Pennsylvania German powwow tradition), art history, astronomy and astrology, pietism and Rosicrucianism, early American millennial movements, alchemy and divination, and so forth. In addition, the Kelpius narrative may also touch the broader domains of Native American studies, German and German-American studies, and religious studies. Given the scholarly and varied

professional identities of Kelpius and his followers, and that they maintained ongoing communications with friends and colleagues in Europe, their history may also align with contemporary scholarly interest in the more encompassing area of Atlantic studies.

This broad array of topics — and there may well be others not mentioned here — I think suggests the potential richness of a more systematic exploration and presentation of Kelpius at this time. And of course, there is also the broadly folkloric dimension of Kelpius, who, popularly known in his legendary role as "Wizard of the Wissahickon", is a significant component of the more "fabulous" or legendary aspect of Philadelphia history and culture.

I'm providing this excerpt here to indicate the scope of a possible Kelpius studies project, and also to affirm that there has been wide interest and support for this idea among the professional community. As I mentioned, the meeting was well-attended, the discussion was productive, and a shared feeling of opportunity and expectation resulted from that exchange.

In the intervening period between that meeting and this writing, I relocated to Vermont and found it more difficult than I'd anticipated to continue with the project, what with packing, moving, and resettling. However, I'll make an effort to revive the project in coming months.