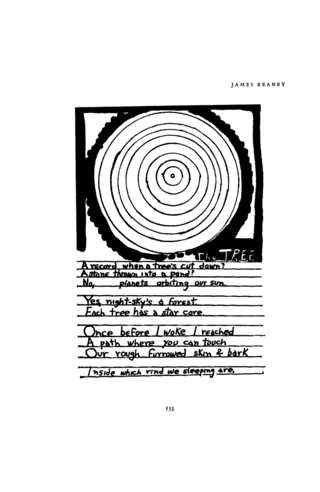 As with all of my posts, this one has been difficult to pin down, though the underlying subject of this post is pastiche and related matters. Looking over previous entries on this blog I see that much of what I publish is an assemblage of fragments, loosely strung together, with connections strengthened by a gradually emerging narrative arc. And as with all posts on this blog, the underlying factor, the urgrund, is very broadly the search for a subject within a given post, that would link with other posts to ultimately form an interrelated whole.

In this case, the originary spark was provided by my reading of a small portfolio of "emblem poems" published several decades ago. According to the Princeton Encyclopedia of Poetry and Poetics, emblem poems were popular in the early modern, or Renaissance period, though my exposure to them was much more recent, courtesy of Poetry Magazine, who published a selection by a Canadian poet called James Reaney. These poems are interesting because they combine writing with drawing, and in a general sense they correlate with a previous post that focused on poetry and collage.

One of Reaney's emblem poems is reproduced above, and is one of four such poems published in the December 1969 issue of Poetry Magazine. I especially like this poem for it's incorporation of singular or separate signs into a meaningful whole, and for its cosmic reference point. Interestingly, and perhaps appropriately given the subject matter of "The Tree", Reaney is described as a "mythopoet" in a recent issue of PN Review (#219, 2014) by the Canadian poet Amanda Jernigan, who writes:

There are critics for whom mythopoetry is, if anything, a was: a short-lived literary movement that grew up here in Canada under the influence of the mythopoetic criticism of Northrop Frye, and died out when its chief practitioners – Macpherson and James Reaney (1926–2008) are the two most often cited – went on to other things. In the May/June 2013 issue of PN Review, Evan Jones called me, only half-jokingly, the last of the mythopoets: 'the only heir to a tradition that was once central and has now died out'.

My feeling is that mythopoetry remains relevant, often appearing when poets seek greater depths of meaning. In fact, we needn't reach all the way back to Robert Duncan, or further back to Yeats, Eliot, or Auden, to locate this persistent relevance. As Susan Howe observed in a recent collection of essays (The Quarry, 2015):

Poetry is an incessant amorous search under the sign of love for a remembered time at the pitch-dark fringes of evening when we gathered together to bless and believe.

What does Howe suggest poetry is? Myth? Storytelling? I'll leave that question aside for now. But moving on I'd say that in my practice I tend to blur the categories. For example, to my mind the emblem poems may be akin in a very general way to the broadside ballads that emerged within the early print tradition in Europe. The latter tended to incorporate images or drawings of various kinds onto a broad sheet covered with printed text. The emblem poem may pose difficulties for the anthologist; broadsides are simpler to reproduce and thus may appear more frequently in compilations of the period. The broadsides valorized text over image, whereas the opposite may be the case with the emblem poems (though Reaney does good work in giving each equal status to each). Thinking further with the assistance of Reaney's poems, I realize that the extended word definitions culled from etymologies, such as by W.W. Skeat, might function in these blog posts as emblems — blocks of print assembled originally to form a definition, but capable of producing an image when displayed on the page in other contexts. See for example Skeat's definition of the word "emblem":

It's difficult to think of this entry as constituting just a text; it's a multilingual assemblage of abbreviations, punctuation marks, and signs that collectively compose an image, rather than a text per se. Compare this with Brewer's entry for this word in his Dictionary of Phrase and Fable, which is more precisely textual:

Emblem. A symbolical figure; a picture with
a hidden meaning which is "cast into" (Gr. em,
in, ballein, to cast) the visible device. Thus, a
balance is an emblem of justice, white of purity,
a sceptre of sovereignty.
Some of the most common and simple
emblems of the Christian Church are:
A chalice. The eucharist.
The circle inscribed in an equilateral triangle,
or the triangle in a circle. To denote the coequality
and co-eternity of the Trinity.
A cross. The Christian's life and conflict;
the death of Christ for man's redemption.
A crown. The reward of the perseverance of
the saints.
A dove. The Holy Ghost.
A handfrom the clouds. To denote God the
Father.
A lamb, fish, pelican, etc. The Lord Jesus
Christ.
A phoenix. The resurrection.

Having raised the issue of pastiche and imported a Renaissance era literary form into this discussion, I want to reach a little further for additional, possibly provocative parallels. In a recent book titled Inky Fingers, Anthony Grafton argues that early printing (15th-16th centuries) involved a hands-on interplay between scribes, printers, and scholars. In fact, he suggests that the postmodern sensibility and practices of contemporary scholarship may have been foreshadowed by close interactions between scholars and printers during the Renaissance. A reviewer of his book (Erin Maglaque, New Review of Books July 2021) notes that,

He had begun it by citing Macrobius: 'In this Book all is mine, & Nothing is mine. Omne meum, nihil meum.' Pastorius meant that by assembling bits of the old, he had created something new. It took considerable intellectual discernment – and long, cramped hours of reading and notetaking – to create a masterpiece that was at once his own and a compilation of others' writings. The Bee Hive exemplifies what is so puzzlingly postmodern about early modern textuality: it was both individual and collective, unique and pastiched.

"Pastiched" is the key word here, but I want to move on, for now. Erin Maglaque very conveniently (for my purposes) mentions Pastorius. "Pastorius" is Daniel Francis Pastorius, leader of the Germantown community, which was formed in the late 17th century just outside of Philadelphia. (I've written about this community in previous posts, focusing on Johannes Kelpius (the Latinized form of the person otherwise known as Johann Kelp), founder with other Pietists in 1694 of a small utopian community on the banks of Wissahickon Creek, in close proximity to Germantown). Thinking about the Wissahickon Creek area I'd add that the first paper mill in North America was established close by to the Kelpius site (a little further south on the Wissahickon) by the Rittenhouse family, who also were emigrés from Germany, and who settled near Philadelphia during this period. Kelpius was spiritual leader of his small group; he composed as number of hymns which are among the first written in North America. (Note that the issue of "firsts" is very much of dubious value, and is notoriously difficult to establish and pin down.)

I'll wrap this up with a puzzling quote from Bee-Hive (Pastorius hyphenated the title), which I believe remains a little-known classic of early American literature. (Parts of the book are excerpted in The Multilingual Anthology of American Literature, edited by Marc Shell and Werner Sollors). In their selection, Pastorius provides the following description of his work, situating that work, by the way, within the overarching domain of pastiche:

Whereas many prefer meer Rick-shaws beyond Solid meats, I had rather choose to set before them the dainties of other men, than the coarse food of mine own.

Bee-Hive has been dated to around 1696, so this brief description is fascinating; it's firstly a neat summary of Pastorius's intention in compiling his "Common-place" book, which was done principally for the edification and moral instruction of his sons. But note that Pastorius, writing at the close of the 17th century, uses the word "Rick-shaw"  — whereas the OED provides no examples for this word in English prior to the 19th century! The OED explains that the word is an abbreviated form of an earlier word, "Jinrickishaw", which means much the same thing — a conveyance on two wheels pulled by a person. The OED provides an etymology by way of translation: "Jin man + ricki strength, power + sha vehicle." The OED further notes that the word was "First used in Japan c. 1870 but now common in other parts of the world." It may be worthwhile exploring Pastorius's curious usage at some other time. Note, however, that he wrote in multiple languages -- German, Latin, English, and more. Was the word in use among German speakers much earlier than it was used by English speakers? (The word does not appear in my copy of the Langenscheidt Compact German Dictionary.) Was the rickshaw, as we understand the term, in use in Japan or elsewhere in Asia prior to the 19th century? Note that the OED associates the word Jinrichshaw with Japan, whence it spread elsewhere. What are the origins of the word "rickshaw?" What did this word mean to Pastorius? His usage appears to vary from the meaning we nowadays assign to that word.

One more thing — how is it possible that I've brought this post around to yet another discussion of word definitions and word origins?